Adesh University, Bathinda, the flagship academic and research endeavor of Adesh Foundation, a pioneer in health care, medical and technical education came into existence in the State of Punjab in July 2012 by Act no. 6 of 2012 of Government of Punjab, notified under Punjab Government Gazette (Extraordinary) dated July 10, 2012 under Punjab Private Universities policy 2010. The parent body, the Adesh Foundation was established in 1995 vide Registration No. 618 of 1995-1996 (Registered under Societies' Registration Act XXI, 1860) in Sri Muktsar Sahib, an underdeveloped area of Southern Punjab, with aim and objectives of serving humanity in the sphere of health care as well as medical, paramedical and technical education.

Adesh Foundation started its journey in the field of professional education and health care with the establishment of Adesh Institute of Engineering and Technology, Faridkot in the year 1996, to deliver various undergraduate and postgraduate level programmes in the field of technical education. The Foundation established its second degree level institution in the sacred memory of martyrs of Sri Muktsar Sahib under the name Bhai Maha Singh College of Engineering, Muktsar in the year 2002.

The ADESH FOUNDATION has made a rapid progress and growth since its inception by introducing innovative and professional courses in medical sciences, allied health sciences, management and technical education. As the Foundation was identified as having potential of conducting and introducing programmes of research and innovations, a University by the name and style as ADESH UNIVERSITY was established under it’s fold in year 2012. 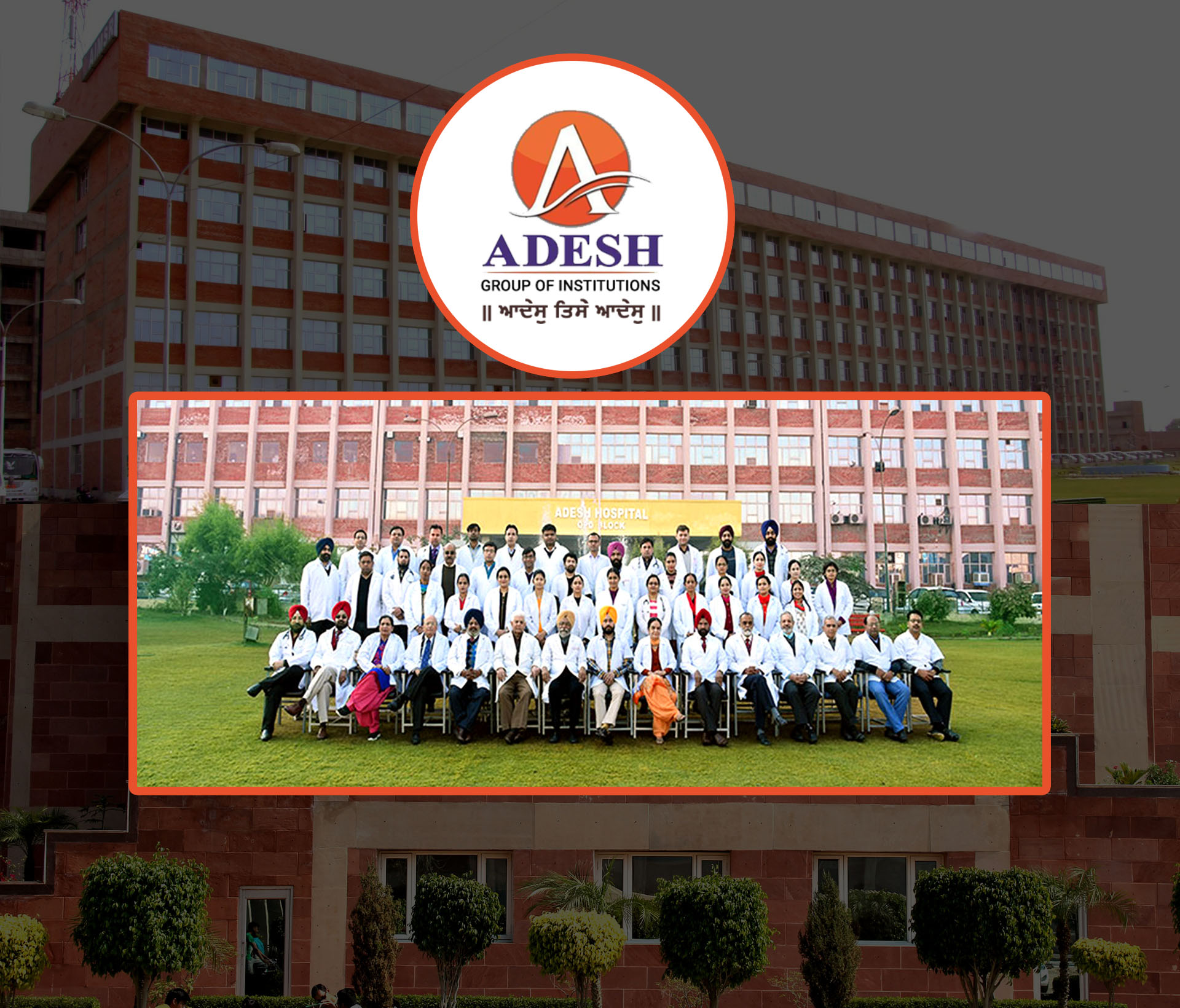 The foundation established a Medical College at Bathinda under the name and style as Adesh Institute of Medical Sciences & Research, Bathinda. This premier medical institution of Northern India with an annual intake capacity of 150 students in MBBS course is duly recognized by Medical council of India/Govt of India. The foundation further established College of Nursing, AIMSR, Bathinda and College of Physiotherapy, AIMSR, Bathinda in the year 2005. College of Pharmacy, AIMSR, Bathinda was established in the year 2006, while Adesh Institute of Pharmacy and Biomedical Sciences, Bathinda was established in the year 2007 to impart training in the field of Pharmacy. All these colleges are recognized/approved by respective regulatory councils / authorities. Adesh Institute of Dental Sciences & Research, Bathinda was established in year 2008 to impart training in dental sciences, with the annual intake of 100 seats in BDS. The dental college is recognized by Dental Council of India/Government of India.

Dr H S Gill, M. D. (Medicine), a great visionary, socialist and educationist, is the founder Chairman of Adesh Foundation and is the Chancellor of Adesh University. He is a versatile genius, a man to be reckoned with in the field of medical & technical education in Punjab. As an educationist he has gifted several medical, technical & engineering institutions under the banner of Adesh Foundation to the people of Malwa. His vision & mission, his acumen & experience, his efforts & accomplishments have made the Adesh Foundation an icon of excellence in education. Dr. Gill is a philanthropist by nature and a doctor by profession. He obtained his MBBS & MD degree from Government Medical College, Patiala. He has established himself as a dynamic entrepreneur and committed planner who has achieved International fame for imparting quality education focused towards development of the hitherto-fore underdeveloped region of Punjab.

Col Singh served with the Indian Army for more than three decades and has a vast exposure in the technical and administrative fields while serving all over the country. Being a member of one of the most advanced technical arm of the Indian Army, he was responsible to have some of the most challenging projects commissioned successfully for the Army establishments and Defence Research and Development Organisation.

As a Registrar of one of the leading technical universities, was involved in its meteoric growth through most optimal utilization of resources and in the smooth progress of one of the newly established Central Universities in its nascent stages as its first Registrar.